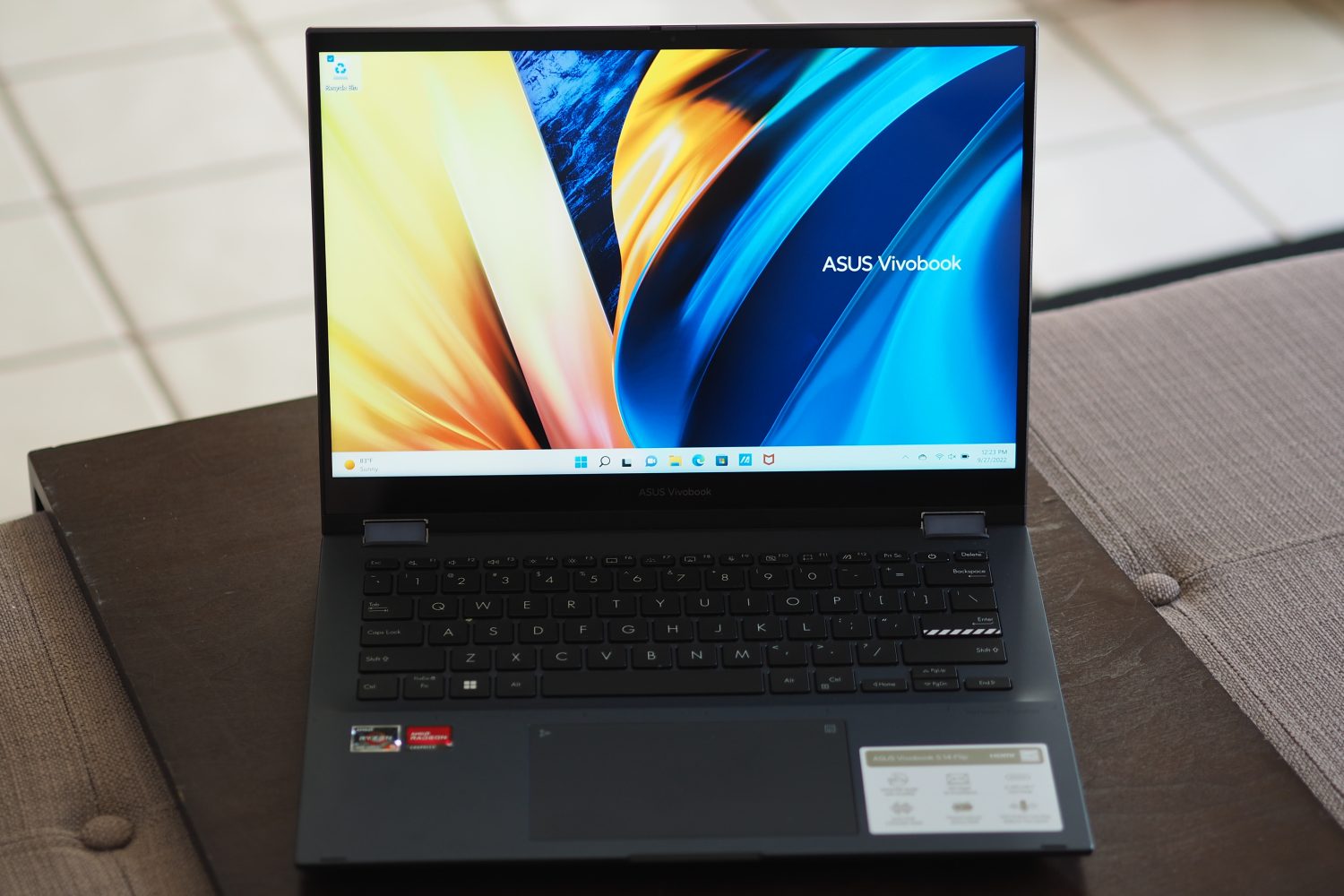 “Its display aside, the Asus Vivobook S 14 Flip is a very solid laptop for the price.”

Laptops have gotten expensive in recent years, especially with many cheaper models being sold out last year.

I know of two configurations of the Vivobook S 14 Flip that are available. There’s the $690 review unit configuration that I tested, which comes with an AMD Ryzen 5 5600H CPU, 8GB of RAM, a 512GB SSD, and a 14-inch WUXGA IPS display.

Then you’ll spend $1,100 to bump to an AMD Ryzen 7 5800H, 16GB of RAM, and a 1TB SSD. That places the laptop either in budget or mid-range territory, depending on the configuration.

Inexpensive doesn’t have to mean cheap

Let’s get this one out of the way: The Vivobook S 14 Flip is constructed in part of plastic, specifically the chassis, while the lid is metal. While plastic is sometimes associated with cheap, that’s an unfair characterization. The Vivbook S 14 Flip is solid enough for a budget laptop, with just the slightest bending of the lid and flexing in the keyboard deck. If this were a $1,500 laptop, then I’d have more of an issue with the build quality.

But, it’s not. Note that I’d feel a little less confident about the $1,000 configuration. In addition, the hinge is too tight to open with one hand, but it does hold the display firmly in place in clamshell, tent, media, and tablet modes. Most truly premium laptops have smoother hinges.

The overall aesthetic is minimalist, but that’s not an attribute of budget laptops. In fact, in previous years, budget machines were often kitted out with tons of plastic “chrome” that made them garish and cheap looking. The Vivobook S 14 Flip is a uniform blue color with the line’s new logo on the lid and no embellishments other than chrome hinges. The single, slightly weird standout feature is a striped pattern running along the bottom of the Enter key.

Still, I have no complaints about the Vivobook’s appearance, and it’s not much different from last year’s Vivobook Flip 14. The laptop is reasonably thin at 0.74 inches and weighs 3.3 pounds.

Interestingly, the Vivobook S 14 Flip is one of a handful of Asus laptops that incorporate the company’s Bacterial Guard technology. That’s a coating throughout the laptop that inhibits the growth of 99% of bacteria, making the laptop less likely to spread disease. It doesn’t protect against COVID-19 and other viruses, but for the usual day-to-day bacteria that usually coat electronic devices, it’s welcome. And it’s a nice feature for a budget machine.

The keyboard is spacious with large enough keycaps, and its switch mechanism has plenty of depth with a light feel. There’s a confident click midway through a keystroke, but the bottoming action is harsh. It’s not as good a keyboard as you’ll find on premium laptops like HP’s Spectre and Dell’s XPS lines, but it’s better than some other budget offerings. The touchpad is wide and spacious with a smooth surface and firm clicks that are just a tad too loud.

In a nod to the “S” designation in the laptop’s name, Asus included its NumberPad 2.0 technology that embeds an LED numeric keypad in the touchpad that can be easily switched on and off. If you enter a lot of numeric data, then you’ll love it, and if you don’t, then you can just switch it off and forget it’s there.

But it’s not something you typically find on a $690 laptop. Finally, the display is touch-enabled and supports the active Asus Pen 2.0 (not included) with 4,096 levels of pressure sensitivity and USB-C charging, another surprise given the price.

The webcam is Full HD, while some newer premium laptops like the Dell XPS 13 Plus are still stuck on 720p. It incorporates Asus’s 3D noise reduction technology and provides a great image with plenty of detail in all kinds of lighting conditions. The resolution alone, though, is excellent for a laptop of this price. A physical shutter, meanwhile, provides peace of mind regarding privacy.

There’s no infrared camera for Windows 11 passwordless login support; instead, Asus incorporated a reliable fingerprint reader in the power button, the perfect location.

Inexpensive also doesn’t have to mean slow or short-lived

My review unit was equipped with the AMD Ryzen 5 5600H, a six-core/12-thread CPU running at up to 4.2GHz with a default 45-watt TDP that’s configurable between 35 and 54 watts. On paper, the CPU should provide solid productivity performance.

In our benchmarks, the Vivobook S 14 Flip does well against the slower Vivobook Flip 14 AMD and the VAIO Fe 14.1 with a 15-watt Core i7-1255U. It can’t keep up with the 28-watt Core i7-1260P. Interestingly, the Ryzen 5 5600H was fast in Cinebench R23 multi-core while slower in Geekbench 5 and our Handbrake test that encodes a 420MB video as H.265. It also did well in the PCMark 10 Completely benchmark that tests a variety of productivity, multimedia, and creative tasks.

Overall, as expected, the Vivobook S 14 Flip was a solid productivity performer but isn’t going to be very well-suited for more than lightweight creative tasks. Its Radeon graphics scored unusually low in the 3DMark Time Spy graphics test, at just 727 and about half of what Intel’s Iris Xe graphics achieve. The laptop hit just seven frames per second (fps) in Fortnite at 1200p and epic graphics — poor by any standard.

Battery life is important here, too, as it’s a characteristic that old-school budget machines once compromised. The Vivobook S 14 Flip does well enough, though.

With its 50 watt-hour battery (a 70 watt-hour version comes with the OLED display configuration), the Vivobook S 14 Flip did well in our web browsing test, leading our comparison group. It fell behind in our video test but still managed an average score. Overall, the Vivobook S 14 Flip can likely manage a full day’s work with a light enough productivity workload. Like some other AMD systems I’ve reviewed, it was unable to complete the PCMark 10 Applications battery test that’s the best indication of productivity battery life.

So, where did Asus cut a corner to slip into such a low price? Arguably, the display qualifies. While it was bright enough at 321 nits, exceeding our 300-nit standard, and its contrast was good at 1,230:1, its colors were narrow and not terribly accurate.

It shared similar results with the Dell Inspiron 14 2-in-1 while falling well behind contemporary premium and midrange display standards. You definitely don’t want to do any photo editing or design work on this laptop — at least not without connecting to a better premium monitor.

Audio was just okay, with two downward-firing speakers providing adequate volume and clear enough mids and highs. Bass was lacking, though, meaning you’ll want a good pair of headphones for binging Netflix and listening to music.

A solid budget alternative with the right configuration

At a price of $690, the Asus Vivobook S 14 Flip is an attractive laptop with solid if not spectacular performance, good battery life, and a solid enough build. Its display lacks colors, which is the laptop’s primary weakness. That’s not unusual at these prices, though — even today.

Jump up to the $1,000 configuration, though, and you’re competing more directly with laptops like the HP Pavilion Plus 14 and the Acer Swift 3 OLED that have spectacular displays and stronger performance. So, pick the low-end configuration and enjoy a solid value.