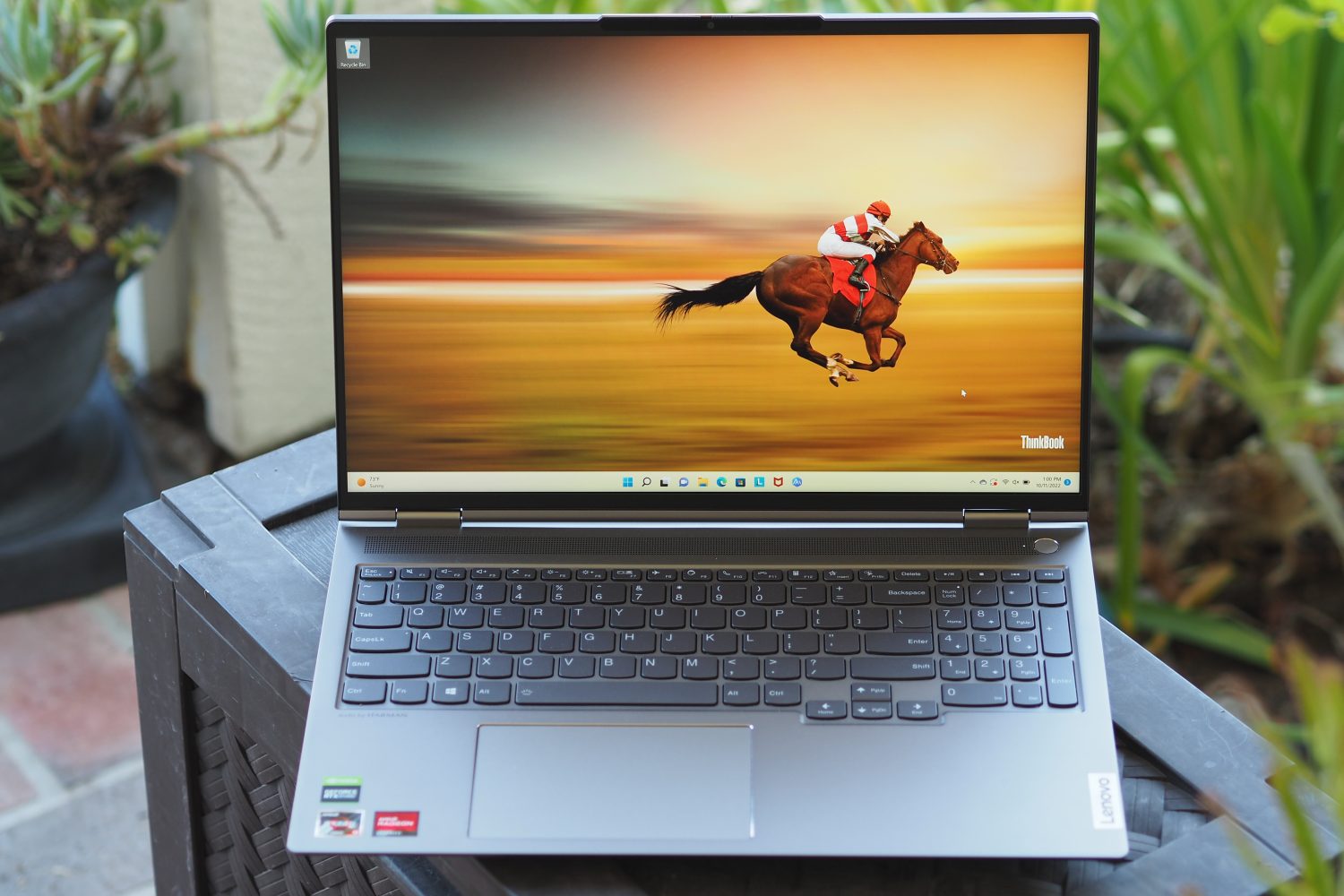 “For a laptop of this price, the Lenovo ThinkBook 16p Gen 3 still lacks the standout features it needs.”

When you have an incredibly wide lineup of laptops, like Lenovo, you need to segment them somehow. The ThinkBook, for example, is aimed narrowly at small and medium-sized businesses (SMBs), looking to offer the kind of aesthetics and prices that consumers look for with some of the enhanced security and services that businesses demand. Presumably, that’s differentiated from the ThinkPad line that’s all-business in its looks and features.

Indeed, the ThinkBook 16p Gen 3 is an interesting member of the lineup, being a 16-inch machine with high-end components and a smattering of features that SMB buyers will appreciate. It’s a strong performer, if not class-leading, but its build quality is suspect, and it’s quite expensive. That makes it hard to stand out from the rest of the lineup.

That makes this a surprisingly expensive 16-inch laptop. Yes, it has nice components, but it’s more expensive than other premium machines like the Dell XPS 15 and XPS 17.

A fresh design that sort of works

The ThinkBook 16p Gen 3 enjoys what’s become an identifiable ThinkBook aesthetic, particularly on the is two-toned lid that has a bold ThinkBook logo. That differentiates it from the rest of Lenovo’s lineup and gives the laptop a bit of panache. Otherwise, the look is a typical business laptop with a dark grey colorway and a standard Lenovo chassis. The lid does connect at a spot that’s set in about half an inch from the rear, which is different, and the keyboard is darker as well. The result is a laptop that looks good and stands out just enough, without being unnecessarily glitzy for a business professional.

It’s also an all-metal build, although it’s not as solid as the Dell XPS 15 or MacBook Pro 16. The lid feels bendable, and there’s some noticeable flex in the keyboard deck. At a price of well over $2,000, it’s hard to overlook the lack of rigidity. The hinge opens with one hand, but there’s a bit of wobble during hardcore typing sessions. Overall, I was a bit disappointed with the ThinkBook 16p’s build quality, and that’s a knock against the machine’s suitability for its target user.

In terms of other creature comforts, the ThinkPad 16p has plenty to attract. The keyboard is light and snappy, with less travel than the ThinkPad’s keyboard but also more comfortable switches overall. The XPS 15 has a slightly better keyboard, but many users probably wouldn’t notice it. The touchpad is smaller than it could be given the available space, but it works well with a smooth, responsive surface and reasonably quiet button clicks. There’s no touch display option, which I prefer to see on a premium laptop.

The webcam is 1080p and provides a quality image that will please business users who need videoconferencing to get their work done. An infrared camera provides Windows 11 Hello passwordless login support, and there’s a fingerprint reader embedded in the offset power button for those who prefer that method for logging in. Lenovo has included Glance software with user presence detection that can put the laptop to sleep when the user steps away and provides digital wellness functionality, although it was disabled on my review unit.

Lenovo’s ThinkShutter privacy screen is there to close off the webcam. In the most pertinent nod to business users, the ThinkPad 16p Gen 3 also incorporates Microsoft’s Secure BIOS.

Finally, connectivity is strong, albeit with a port configuration that you don’t often see outside of larger gaming machines. You don’t get Thunderbolt 4 thanks to the AMD chipset, but everything else is there including USB-C, USB-A, HDMI, and a full-size SD card reader. Some of the ports are arranged along the back, which we don’t typically see, and it’s convenient once you get used to it. There’s a proprietary power connector matched with a massive 230-watt power brick, necessary to keep the high-end components running.

Faster at fun than it is at work

Just because you’re a businessperson doesn’t mean you don’t want to play some games. The ThinkPad 16p, with its Ryzen CPU and RTX 3060 GPU, is more adept at play than at work. I’ll start with its productivity and creative performance, because of course, that’s what you’re paying for, but I’ll be sure to cover gaming as well. The ThinkPad’s thermal design was fine, with limited throttling but quite a bit of fan noise when the CPU and GPU spun up. Lenovo’s thermal utility didn’t make a huge difference in any of our usual benchmarks, but I’ve reported those scores where appropriate.

My review unit packed in an eight-core/16-thread 45-watt AMD Ryzen 9 6900HX CPU. That’s top-of-the-line until AMD’s 7000 series comes out, and it’s a fast CPU for sure. Even so, it fell behind our comparison group in Geekbench 5, including machines running Intel’s 45-watt 12th-gen CPUs. As usual, AMD’s single-core scores lagged the most. The ThinkPad 16 was fast in Cinebench R23 multi-core, though, and it did well in our Handbrake test that encodes a 420MB video as H.265.

The ThinkPad 16p was a solid performer, but it didn’t quite keep up with some newer Intel-based laptops. In the Pugetbench Premiere Pro benchmark that runs in a live version of Adobe’s Premiere Pro, the ThinkPad 16p was behind laptops like the HP Envy 16 that utilized the RTX 3060 CPU. This benchmark benefits from some Intel optimizations in Adobe apps that may or may not apply to a given workflow.

Overall, the ThinkPad 16p meets the performance needs of the most demanding professionals no matter the business size, and it can meet the needs of creators as well. You’ll get better performance out of Intel’s latest 45-watt 12th-gen CPUs, at least in most of our benchmarks, and the Apple MacBook Pro 16 continues to dominate.

The ThinkPad 16p Gen 3 ships with Nvidia Studio drivers, meaning it’s optimized for performance and reliability in certain demanding applications (e.g. Adobe Creative Suite) as opposed to gaming. Even so, the laptop performed well in all our benchmarks and was faster than some other creator-focused laptops we’ve reviewed. It was particularly fast in Assassin’s Creed Valhalla, and it tied for first in Cyberpunk 2077.

You’ll find gaming laptops that are faster, but for a non-gaming machine, the results were pretty impressive. Stick with 1080p gaming, and you’ll get 60+ frames per second (fps) in many modern titles with graphics turned up, and you won’t have to turn them down much to play at 1440p.

It’s strange to ding a laptop display that’s so bright at 525 nits and enjoys a contrast ratio of 1,160:1 — both are solid scores for a modern IPS display. An accuracy of DeltaE 1.21 is also strong. However, the ThinkPad 16p’s display could only muster 98% of sRGB and 75% of AdobeRGB. Those are fine scores for productivity tasks, but demanding creators want wider colors. Given that this is the laptop’s only available display, it limits this laptop’s appeal to that group.

I’ll note that this is a 165Hz display, which provides for a smoother Windows 11 and gaming experience, although you’ll have to turn graphics down to hit those kinds of frame rates. The higher refresh rate is certainly a perk, though, and it elevates everything you do with the system. The speakers were loud but sounded a bit tinny due to a lack of bass, making them a step below those on some other larger machines.

Battery life is decent, not that tremendous longevity should ever be expected from a laptop with a 16.0-inch 16:10 WQXGA (2,560 x 1,600) display and power-hungry components. The ThinkPad 16p hit about 6.75 hours in our web browsing test and nine hours in our video test. Both scores are less than average compared to most laptops I’ve reviewed in 2022, although that’s solid enough for the class.

If you want to take the laptop on the road, then you’ll want to carry that large and heavy power brick with you if you need a full workday’s longevity.

Not a bad laptop, but not special either

Some laptops are harder than others to categorize and rate. The ThinkBook 16p Gen 3 is such a machine. While Lenovo stresses its suitability for small and medium-sized businesses, I didn’t find much that makes the laptop truly stand out for this crowd. Things like webcam privacy features and user presence sensing exist on mainstream consumer laptops, as do attractive aesthetics and solid performance. The ThinkPad 16p even comes with a one-year warranty, which is industry standard and less than many true business machines offer.

At the same time, while performance was solid and battery life was better than you’ll find in some other 16-inch laptops, build quality wasn’t up to par given the high starting price of $2,359. Spend this much money, and you can get a Dell XPS 15 that’s roughly as fast, built much better, and has a significantly better display.

In evaluating the ThinkPad 16p as a suitable machine for SMB users, I end up being unconvinced this has any serious advantages. There really isn’t that much there that you won’t find on some other mainstream laptops aimed at consumers, and the build doesn’t live up to the price tag.