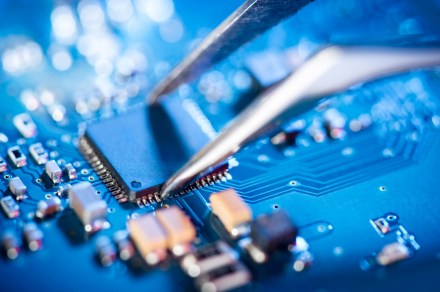 A team of researchers have made a huge breakthrough in data transmission via fiber optics by using a single computer chip to transfer 1.84 petabits of data per second, which is roughly twice the entire internet’s traffic (or approximately 230 million photo downloads per second).

Asbjørn Arvad Jørgensen at the Technical University of Denmark in Copenhagen and his colleagues from Denmark, Sweden, and Japan used a photonic chip – a technology that allows optical components to be built onto computer chips – to divide a stream of data into thousands of separate channels.

The team split the stream into 37 sections for each fiber optic cable core, then split those sections into 223 data chunks in the electr-magnetic spectrum, transmitting them all at once over 7.9 kilometers without interfering with each other.

“You could say the average internet traffic in the world is about a petabit per second. What we transmit is two times that,” says Jørgensen in New Scientist. “It’s an incredibly large amount of data that we’re sending through, essentially, less than a square millimeter [of cable]. It just goes to show that we can go so much further than we are today with internet connections.”

While not as fast as data transfer rates of 10.66 petabits per second that are currently possible, the beauty of this record-breaking achievement by Jørgensen and his team is miniaturizing. Compared to bulkier equipment currently used to achieve the 10.66 petabits per second speeds, the upscaling of a single chip to match or even exceed that transfer rate is going to remain exceedingly compact.

As it is, Jørgensen further thinks that they can improve on the current setup and create an even smaller on-chip design about the size of a matchbox. Rather than multiple lasers in parallel, they want to shrink the equipment down to the silicon level.

The team also theorizes that if their system is built to the size of a small server, it could transmit transfer as much data as 8,251 matchbox-sized devices currently do when set in a single parallel system.