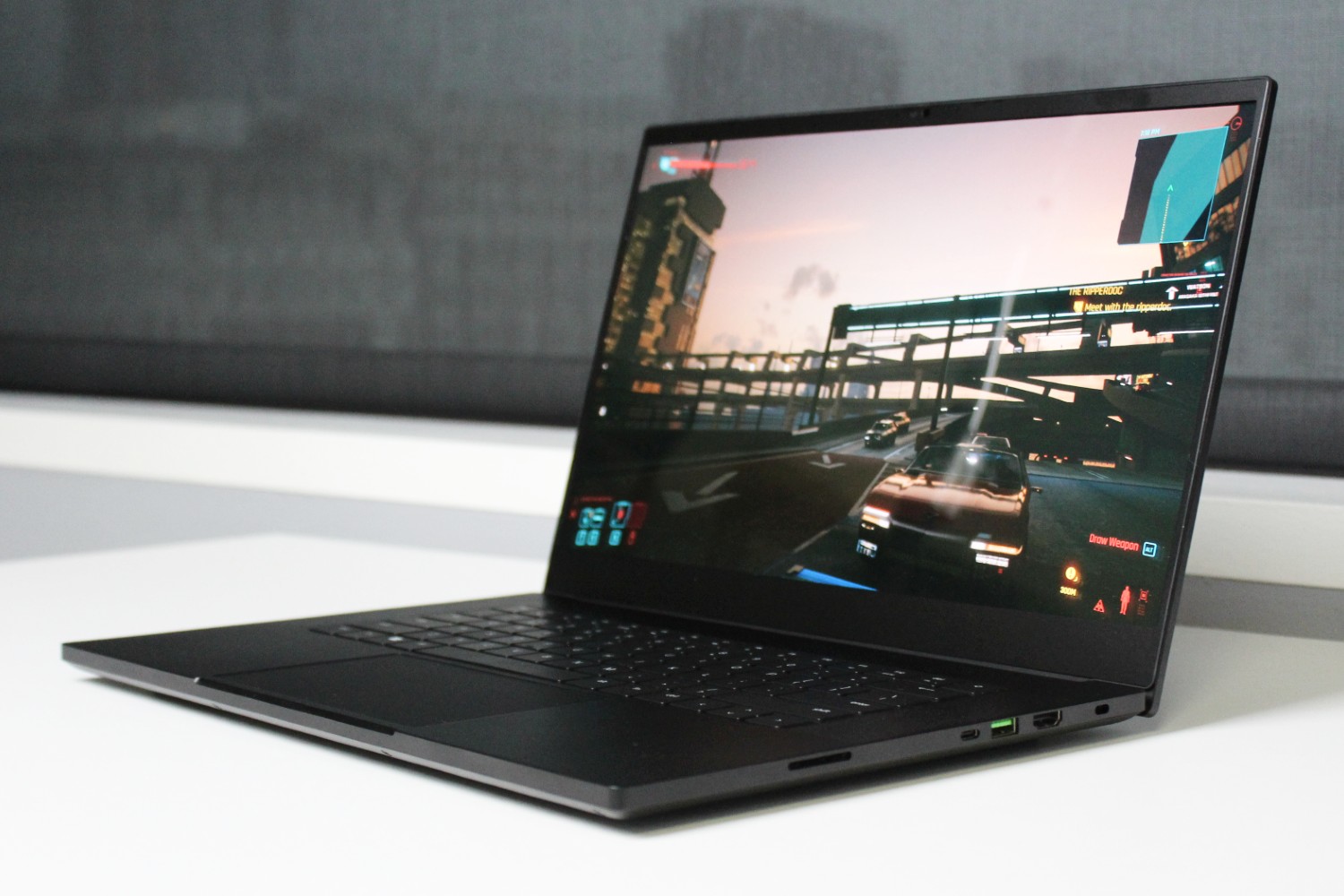 Playing games on a 240Hz OLED panel feels like we’ve reached some kind of peak for the PC. It’s the best image quality you can get on a screen, paired with a refresh rate higher than most gamers will ever need.

Best of all, it’s showing up in the most high-end gaming laptops you can buy, like the Razer Blade 15. But this laptop is far more than just tech for tech’s sake — this drags the future of PC gaming into the present. The results are seriously impressive, even when the Razer Blade 15 itself is beginning to feel a bit long in the tooth.

It’s all in the screen

The 2022 version of the Razer Blade 15 doesn’t feature any major changes to the formula. It has the latest RTX 3080 Ti and 3070 Ti GPUs available, alongside the Core i9-12900H, of course. But the tweaks to the actual design itself are minor. There are slightly larger keycaps for the keyboard and a new laser-cut grille for the upward-firing speakers – but not anything you’d notice without very close inspection.

But the option for a 240Hz OLED panel? That’s something new and exciting to test out. The rollout of OLED to laptops has been painfully slow, especially on gaming laptops. Razer has offered an OLED model for years, but it’s always been limited to a 4K 60Hz panel – and that’s not one many gamers are interested in due to its resolution and refresh rate. That’s especially been true in past years, when gaming laptops weren’t powerful enough to play in 4K resolution at decent frame rates.

But now, you get an option for an OLED panel at 240Hz and a more reasonable resolution of 2400 x 1600. That means OLED made for gaming, for the first time. Razer is among the first to offer this panel option, ensuring that the Razer Blade 15 continues the trend of using the most advanced screens available.

So, how does it look? Well, pretty incredible, as you can imagine. This is the best screen on a gaming laptop I’ve ever tested. Color saturation and contrast are off the charts. I’ve never seen a gaming laptop with a screen this well-calibrated, in particular, one sporting a Delta-E of just 0.52.

I also enjoy the fact that this is a glossy display. That’s true of all OLED displays that currently exist, but this is a true gaming laptop — and the glossy screen delivers clearer and bolder visuals than a matte finish ever could. You’re not seeing the screen through a textured filter that dampens the contrast of this glorious panel. The trade-off, of course, is dealing with reflections and glare. And there’s plenty of it. The max brightness of 398 nits does help in that regard, but you’ll still find yourself adjusting the screen or moving away from windows, especially if you’re gaming or watching movies.

The best hidden feature of this screen, though, is HDR support. It’s not upfront in the marketing, and the panel hasn’t been certified by DisplayHDR. But the combination of the incredible contrast of OLED and a peak HDR brightness of 620 nits means it produces some really solid HDR performance — and it looks fantastic. Colors come to life, you see new detail in scenes, and the lighting feels so much more realistic. It’s hard to describe in words or capture in photos, but if you’ve never gamed in HDR, you don’t know what you’re missing.

Of course, 620 nits of peak brightness isn’t as high as your favorite TV, a gaming monitor like the Alienware 34 QD-OLED, or even an XDR panel on the MacBook Pro. But even as is, this is some of the best HDR performance I’ve experienced on a gaming laptop. And, of course, that HDR goodness applies to other forms of content too, whether that’s movies or YouTube videos.

As this 240Hz OLED panel is fairly exclusive, Razer only offers it on a single configuration. You can only get the 240Hz OLED panel paired with an RTX 3070 Ti. A more powerful RTX 3080 Ti option is missing, which is unfortunate. This is a powerful gaming laptop, no doubt, but the 3070 Ti can’t make use of the 240Hz quite as well as a 3080 Ti would have. With the RTX 3070 Ti, you’ll have to turn down graphics settings in most games significantly to get over 200 frames per second (fps) — especially when playing at the native 1600p resolution.

The Razer Blade 15 is still a performer, though in many AAA games, you’ll want to drop either the resolution or the graphics settings to get over 60 fps. Red Dead Redemption 2, for example, only averaged 53 fps at 1600p at Ultra settings. Assassin’s Creed Valhalla averaged 70 fps at the Ultra High settings preset, and dropping it down to 1080p brought that up to 80 fps.

Lighter fast-paced titles like Fortnite or Civilization VI are where the laptop thrives and makes better use of that high refresh rate.

Your time working in your favorite coffee shop might be limited due to the battery life.

Beyond just frame rates, the Razer Blade suffers from some of the same issues the design has always had. It gets very hot during gameplay, to the point where it’s uncomfortable. Touching the area in between the hinge and keyboard could seriously hurt you, and while the keyboard and palm rests aren’t as bad, it’s probably enough to make you limit the length of your game sessions.

One of the downsides of this screen is battery life. The Razer Blade 15 has never been great in battery life, but this high-resolution, high refresh rate OLED screen takes it a step down further. This model of the Razer Blade 15 only lasts around four hours in light web browsing or five hours in local video playback. Of course, you won’t be gaming without being plugged into the wall, but if you’re planning on using this as a work laptop too, you’ll want to keep that in mind. Your time working in your favorite coffee shop might be limited. The Razer Blade 14 remains the far better choice when it comes to battery life.

More of the same

I won’t get into every detail of this design, because many of its elements haven’t changed for many, many years. It’s thin and light, yes, though the Razer Blade 14 is now the go-to option in that realm. Other things I continue to love about this design include the excellent port selection (which includes a full-size SD card slot), the solid 1080p webcam, and the up-firing speakers. They still can’t compete with the MacBook Pro, but they’re some of the better speakers you’ll find on a gaming laptop.

The keyboard continues to be a highlight too. Razer’s optical-mechanical keyboard has been around for years by now, but it remains one of my favorite keyboards to type on. It feels tactile in a way that many keyboards don’t, even if the “click” sound is artificial.

The touchpad remains large and precise, though the palm rejection still hasn’t been fixed. It’s been an issue with the Razer Blade laptops for years now, and yet my palms deliver accidental clicks while typing every once in a while. It’s frustrating, especially given how long it’s been a problem.

The best Razer Blade yet?

The OLED 240Hz Razer Blade 15 is the best in the line yet. It doesn’t fix some of the problems that the Razer Blade has always had, but it heightens the gaming experience in a major way thanks to this screen.

Then again, it’s also one of the most expensive configurations in the lineup, coming in at $3,300. That’s $300 more than the 1440p 240Hz model — and in my opinion, it’s worth that price difference simply for the ability to enjoy HDR gaming.

Then again, it should be noted that the MSI Raider GE67 HX features this same panel for a much lower price. That’s a heftier laptop without the bells and whistles of the Razer design, but if it’s just performance and fantastic image quality that you’re looking for, the MSI model might provide more value than the Razer Blade 15. That’s typical for the Razer brand, but certainly something to keep in mind if you’re interested in this screen in particular.