Facebook employees walked away from their work-from-home desks on Monday and took to Twitter to accuse Chief Executive Mark Zuckerberg of inadequately policing US President Donald Trump’s posts as strictly as the rival platform has done.

Reuters saw dozens of online posts from employees critical of Zuckerberg’s decision to leave Trump’s most inflammatory verbiage unchallenged where Twitter had labeled it. Some top managers participated in the protest, reminiscent of a 2018 walkout at Alphabet’s Google over sexual harassment.

It was a rare case of staff publicly taking their CEO to task, with one employee tweeting that thousands participated. Among them were all seven engineers on the team maintaining the React code library which supports Facebook’s apps.

“Facebook’s recent decision to not act on posts that incite violence ignores other options to keep our community safe. We implore the Facebook leadership to #TakeAction,” they said in a joint statement published on Twitter. 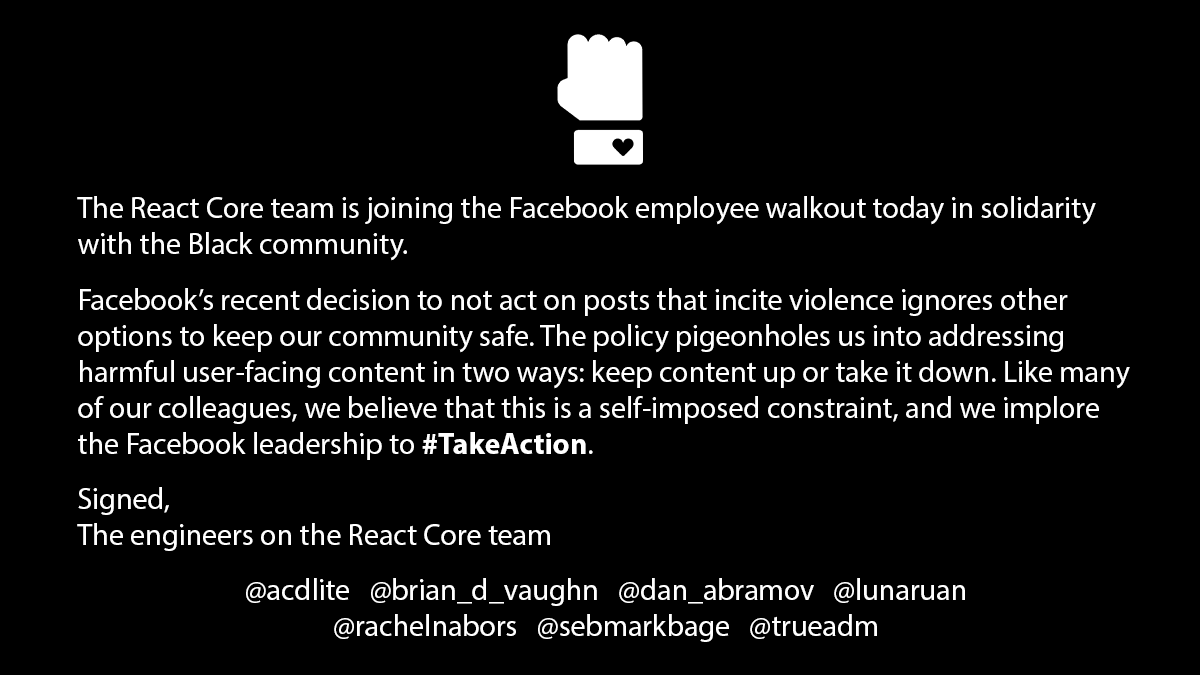 “Mark is wrong, and I will endeavor in the loudest possible way to change his mind,” wrote Ryan Freitas, identified on Twitter as director of product design for Facebook’s News Feed. He added he had mobilized “50+ likeminded folks” to lobby for internal change.

Mark is wrong, and I will endeavor in the loudest possible way to change his mind.

A Facebook employee said Zuckerberg’s weekly Friday question-and-answer session would be moved up this week to Tuesday.

Katie Zhu, a product manager at Instagram, tweeted a screenshot showing she had entered “#BLACKLIVESMATTER” to describe her request for time off as part of the walkout.

Facebook will allow employees participating in the protest to take the time off without drawing down their vacation days, spokesman Andy Stone said.

Employees “recognise the pain many of our people are feeling right now, especially our Black community,” Stone wrote in a text.

“We encourage employees to speak openly when they disagree with leadership. As we face additional difficult decisions around content ahead, we’ll continue seeking their honest feedback.”

On Friday, Twitter affixed a warning label to a Trump tweet that included the phrase “when the looting starts, the shooting starts.” Twitter said it violated rules against glorifying violence but was left up as a public interest exception.

Facebook declined to act on the same message, and Zuckerberg sought to distance his company from the fight between the president and Twitter.

On Friday, Zuckerberg said in a Facebook post that while he found Trump’s remarks “deeply offensive,” they did not violate company policy against incitements to violence and people should know whether the government was planning to deploy force.

Zuckerberg’s post also said Facebook had been in touch with the White House to explain its policies.

Twitter used the same label as for Trump on Monday to hide a message by Representative Matt Gaetz of Florida that likened protesters to terrorists and called for them to be hunted down “like we do those in the Middle East.”

Gaetz said in response he would “see” Twitter in the Judiciary Committee.

Some of Facebook’s dissenting employees have praised Twitter for its response over Trump. Others, like Jason Toff, a director of product management and former head of short-form video app Vine, started organising fundraisers for racial justice groups in Minnesota. Zuckerberg wrote on Facebook on Monday the company would contribute an additional $10 million (roughly Rs. 75 crores) to social justice causes.

Toff tweeted: “I work at Facebook and I am not proud of how we’re showing up. The majority of coworkers I’ve spoken to feel the same way. We are making our voice heard.”

I work at Facebook and I am not proud of how we’re showing up. The majority of coworkers I’ve spoken to feel the same way. We are making our voice heard.

This Is How to Adjust Screen Resolution in Windows | Digital Trends