Global Mobile Phone Shipments to Fall 14.6 Percent in 2020 Due to Coronavirus Pandemic: Gartner

Global shipments of all mobile phones are forecast to decline 14.6 percent in 2020, while the smartphone shipments will witness a relatively lower fall of 13.7 percent this year, research and advisory firm Gartner claimed on Tuesday. The research firm also says that global shipments of devices, including PCs, tablets, and mobile phones, are on pace to decline 13.6 percent this year due to the coronavirus pandemic. The research firm speculates that the changing trend in work from home culture will fuel demand for more “versatile laptops.”

According to a note shared by Gartner on Tuesday, a total of 1.9 billion units of PCs, tablets and mobile phones are expected to be shipped in 2020, compared to the 2.1 billion units that were shipped in 2019. The estimates are based on the data collected until May by the company.

Roughly 1.3 lakh units of ultramobile device that include thin and light notebooks are expected to be shipped this year, while roughly 1.4 lakh units of mobiles are speculated to be globally shipped in 2020. 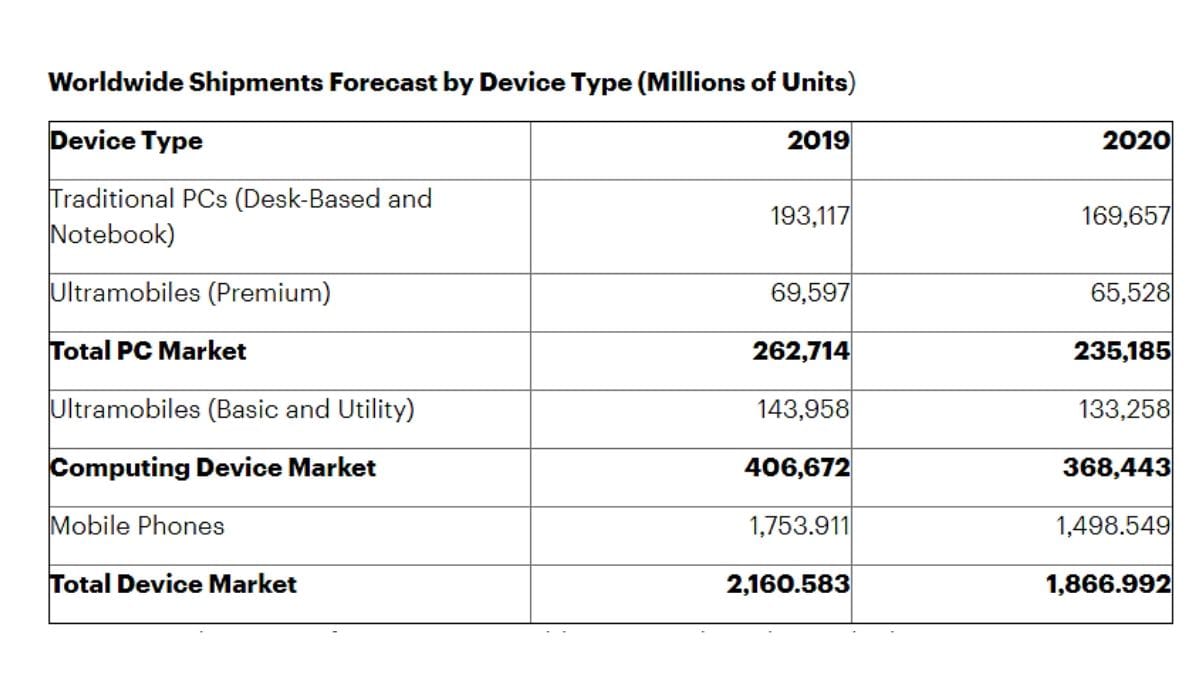 Speaking more on the forecast, senior research director at Gartner, Ranjit Atwal said that while users had increased the use of mobile phones to communicate with colleagues, work partners, friends and families during coronavirus lockdowns, reduced disposable income would result in fewer consumers upgrading their phones.

Similarly, PC shipments are expected to decline 10.5 percent while shipments of notebooks, tablets, and Chromebooks are forecast to decline slower than the PC market overall in 2020. The Gartner report also projects that the 5G mobile market that was expected to be the catalyst to increase phone replacements will likely represent only 11 percent of total mobile phone shipments in 2020.

“The lack of 5G geographical coverage along with the increasing cost of the 5G phone contract will impact the choice of a 5G phone,” says Annette Zimmermann, Research Vice President at Gartner, in a statement.

Additionally, due to growing work from home culture, the company speculates that the IT departments will shift to more towards notebooks, tablets and Chrome devices for work, rather than traditional desktop PCs.

Notably, Gartner in January had speculated that in 2020, global shipments of devices such as PCs, tablets and mobile phones will increase to 2.16 billion units, buoyed by growth in smartphone shipments driven by 5G handsets.

What Does GPU Stand For? A Look at a Vital Piece of Hardware | Digital Trends