Samsung Galaxy A72 Review: Worth the Premium Over the Galaxy A52? 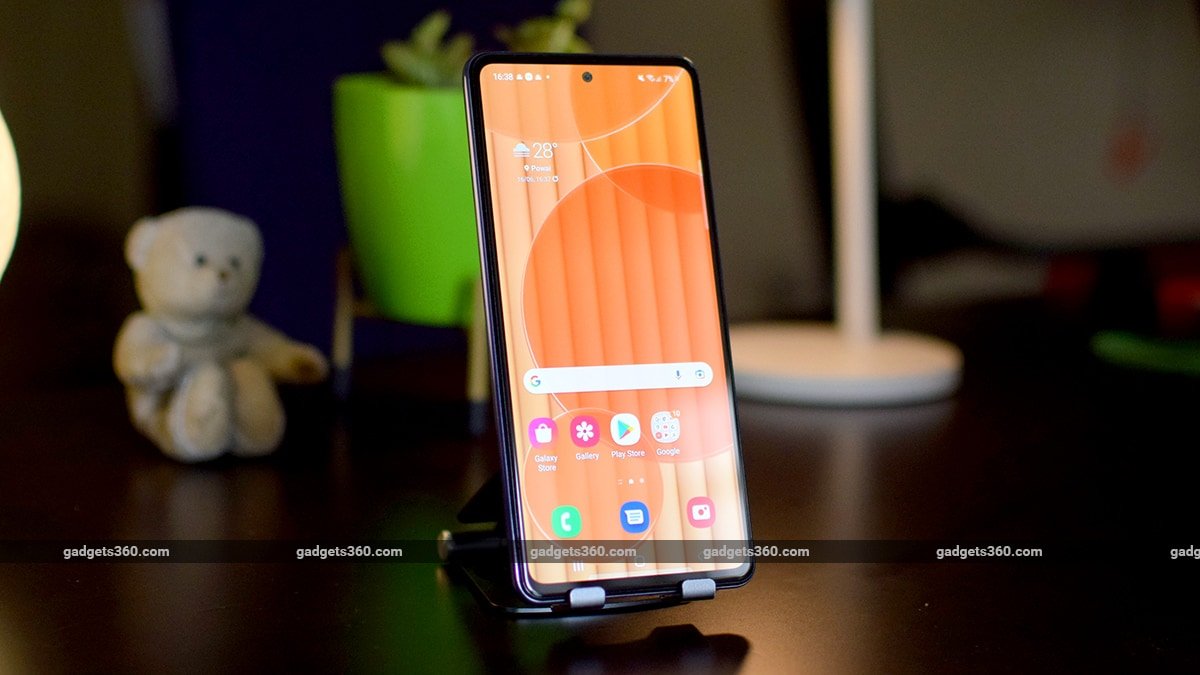 However, at Rs. 34,999 for the base variant which has 8GB of RAM and 128 storage or Rs. 37,999 with 256GB of storage, the Samsung Galaxy A72 has some pretty stiff competition from the likes of the OnePlus 8T, Xiaomi Mi 10T Pro, and the Vivo X60. If you stretch your budget close to Rs. 40,000, you could even get the Mi 11X Pro which has a Snapdragon 888 SoC. The Galaxy A72 really needs to make a strong case for itself if we are going to recommend it over the competition. Let’s find out if it’s good enough.

The Samsung Galaxy A72 features a fresh new design, similar to what we saw with the Galaxy A52. It’s simple and elegant, and comes in a variety of pastel colours. The Awesome Violet trim that I have looks soothing, and thanks to the matte finish, fingerprints aren’t an issue. The frame and back are built from plastic, and this phone does seem relatively sturdy, although it doesn’t feel very premium once you hold it. I can understand using an all-plastic body for the Galaxy A52, but I would have at least expected a glass back on the more expensive Galaxy A72. The phone is a bit heavy at 203g but not too thick at just 8.3mm.

The 6.7-inch Super AMOLED display has a full-HD+ resolution and 90Hz refresh rate, and supports HDR playback. I found the quality of the display to be good, with above-average brightness and punchy colours. There’s a visible blue colour shift when you view white backgrounds off-axis, but I didn’t find this to be too distracting. The ports and buttons on the Samsung Galaxy A72 are well laid out. You even get a 3.5mm headphone jack. All the openings are weather-sealed since the phone has an IP67 rating for dust and water resistance.

The Samsung Galaxy A72 looks handsome in this shade of purple

The second slot in the SIM tray can support either a second Nano-SIM or a microSD card. In the box, you’ll find a 25W power adapter with a USB Type-C port, a corresponding USB cable, and the SIM eject tool. You don’t get a headset or a case bundled with this phone.

Samsung Galaxy A72 specifications and software

The core specifications of the Samsung Galaxy A72 are nearly identical to those of the Galaxy A52, and that’s a bit of a letdown considering the price difference. The Qualcomm Snapdragon 720G is simply not intended to compete with its own higher-end siblings, the Snapdragon 865, 870, and even the 888 — all of which can be found in phones priced under Rs. 40,000. This phone has 8GB of RAM and either 128GB or 256GB of storage. You also get Bluetooth 5, dual-band Wi-Fi ac, NFC, and the usual suite of sensors and satellite navigation systems.

The Samsung Galaxy A72 has an in-display fingerprint sensor, but I found it to be very inconsistent with authentication and a bit sluggish too. Face recognition works better but not by much, and it failed to recognise my face in dark environments.

The Samsung Galaxy A72 does have a 3.5mm headphone jack

Software duties are carried out by OneUI 3.1, which is exactly the same as what we saw on the Galaxy A52. OneUI is feature-rich and looks polished. There’s Samsung Pay for making contactless payments in stores. I didn’t notice any ads in apps such as Weather, but there are plenty of preinstalled apps, most of which felt unnecessary. Thankfully, it is possible to uninstall all of them. Some of Samsung’s own apps such as the My Galaxy App have the tendency to clutter your notification shade and there’s little you can do to stop this.

The Snapdragon 720G SoC is quite underpowered compared to the competition at this price, but it’s still powerful enough to handle Android 11. There were a few instances during my review when I felt a bit of sluggishness during multitasking, but this wasn’t too severe. Scrolling through lists in apps felt snappy thanks to the high screen refresh rate. Benchmark performance was pretty solid too, and the Samsung Galaxy A72 scored a respectable 3,36,261 points in AnTuTu. The phone does have a physically large footprint, so one-handed use isn’t the most comfortable.

In addition to benchmarks, games ran really well too. Even demanding titles such as Genshin Impact ran at very playable framerates, with just some mild stutter intermittently. The stereo speakers get loud and sound good. You can enable Dolby Atmos for the speakers too, which adds a slight boost to the overall sound fidelity. I did not notice any sort of overheating with the Samsung Galaxy A72, even with graphically demanding games. Videos were also very enjoyable, especially HDR content, which really makes the display shine.

The Samsung Galaxy A72 has a larger 5,000mAh battery than the one in the Galaxy A52, and yet our HD video loop test ran for about an hour less on this phone (16 hours and 28 minutes). The bundled 25W charger managed to charge the phone’s battery from zero to about 48 percent in half an hour, and up to 87 percent in an hour, which is not bad.

The Samsung Galaxy A72 has a similar camera setup as the Galaxy A52, except that the depth camera has been swapped for a more useful 8-megapixel telephoto camera. The latter has an f/2.2 aperture, 3X optical zoom range, and optical stabilisation. The other cameras are a 64-megapixel main, a 12-megapixel ultra-wide, and a 5-megapixel macro camera. You get a 32-megapixel selfie camera as well.

Photos captured by the main camera were generally above average under good light. Landscapes had good details, colours looked natural, and dynamic range was decent. The ultra-wide camera’s field of view is quite good, although objects along the edges of frames appeared stretched. Close-ups looked very good, with a pleasing level of depth and sharp details. The macro camera was a little disappointing but I wasn’t expecting much from it.

The telephoto camera captured strictly average photos even in good light. Details and textures weren’t very sharp even at the native zoom level, and got progressively softer once I went above that. In fact, I often noticed the phone would simply digitally zoom in using the primary sensor at 3X even under good lighting.

In low light, the Samsung Galaxy A72 will automatically use a long exposure, which means there’s usually very little to no difference between a regular photo and one taken using Night mode. However, if you plan on shooting with the ultra-wide camera, Night mode makes a big difference. The phone almost never switches to the telephoto camera at night, and even if the subject is decently lit, it could go either way.

The selfie camera is not bad, whether you’re shooting during the day or in low light. Selfies looked good, with pleasing details and skin tones. Night mode for selfies isn’t of much help, so you’re better off using the screen flash.

The Samsung Galaxy A72 can shoot up to 4K 30fps video with the rear and front cameras. Video quality is good during the day and in low light. There seems to be very little to no stabilisation being applied at 4K (at least electronically), but as a result, there’s no jitter in low-light videos when you walk and shoot. The camera app also lets you switch between the main and ultra-wide cameras when shooting at 4K.

You get a lot of shooting modes to play with, including Single Take, which captures multiple shots from the rear sensors and automatically applies filters, creates GIFs, etc, depending on what you’ve shot. There’s also a Fun shooting mode, which lets you apply Snapchat filters to your subject.

As it turns out, the Samsung Galaxy A72 is not too different from the Galaxy A52, and that’s a problem. The telephoto camera is a nice addition but I didn’t find it very useful since its image quality was average at best. Other than this, you’re paying a premium over the Galaxy A52 for a slightly larger battery and the bundled 25W charger. It’s hard to justify spending at least Rs. 34,999 for the Galaxy A72 when you can get nearly the same performance and features with the Galaxy A52 at Rs. 26,499, and some phones priced under Rs. 30,000 offer even better specifications and capabilities.

The Samsung Galaxy A72 is a good-looking phone, but so are others at around this price, which makes any of them a better pick. There’s the Mi 10T Pro and OnePlus 8T, both of which deliver better gaming performance and cameras. Vivo’s X60 also looks good on paper, although we haven’t tested it.

If the Samsung name and features such as the IP rating and stereo speakers are what drew you towards the Galaxy A72, I’d suggest buying the Galaxy A52 instead and saving some money. If you absolutely want to spend more, then any of the above competitors would be a better buy.